“People are talking to me about this I think in part because I worked really hard to go not just where it’s comfortable but where it’s uncomfortable, and did well in a number of those places that Donald Trump won,” Klobuchar said on ABC’s “This Week.”

Sen. Amy Klobuchar says she is “thinking about” a 2020 run but has “no announcements.”

“People are talking to me about this I think, in part, because I have worked really hard to go not just where it’s comfortable but where it’s uncomfortable,” she says https://abcn.ws/2ScG8sS 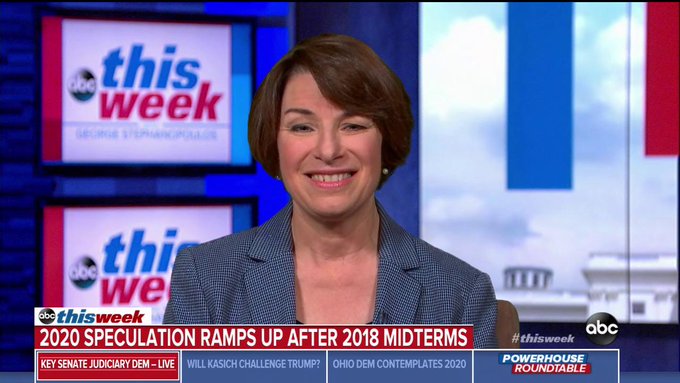 Klobuchar was reluctant to make a formal announcement of her 2020 bid.

“I’m someone for those who are exhausted by politics who likes to get things done,” Klobuchar said. “But right now, I’m still just thinking about this, talking to people. I’m sorry to say I have no announcement for you on your show.”

Besides a possible run by Beto O’Rourke, who came close to beating Republican Senator Ted Cruz in Texas, Klobuchar might just be the best Democrat pondering a run at the moment.

Particularly because of the potential saturation of the field of Democratic candidates, Klobuchar could be the only centrist woman candidate who does not already have stains in their national portfolio — like New York Senator Kirsten Gillibrand for previously supporting Bill Clinton, Harvey Weinstein and Al Franken, and Massachusetts Senator Elizabeth Warren, who famously mistakenly declared she was Native American.

Klobuchar won re-election to the Senate in 2018 by some 60 percent. Based on Klobuchar’s success in Minnesota, particularly because of Minnesota’s demographics, she could be very successful in a general election. Hillary Clinton won Minnesota by just over 2 percent in the 2016 general election, meaning there are a significant number of Trump supporters in the state, yet Klobuchar dominated her re-election while running as a Democrat.

While Klobuchar would likely win over many Independent voters in a general election, the question is whether she will be able to appeal to the far left during the Democratic primary.