“In the news media there has been an emotional reaction to Trump… too many people for Trump or against Trump have become emotionally unhinged about this,” Woodward said, according to NBC Newsreporter Dylan Byers.

The lawsuit and Acosta’s suspension come after Acosta refused to surrender the microphone when President Trump finished answering his questions.

“This morning, CNN filed a lawsuit against the Trump administration in DC District Court,” CNN top executive Jeff Zucker said in a statement. “The White House has violated CNN and Jim Acosta’s First Amendment rights of freedom of the press and Fifth Amendment rights to due process. We are demanding the immediate return of Jim’s White House credential.”

CNN is claiming that Acosta’s suspension prevents them from reporting on the president. The White House disagrees.

“CNN, who has nearly 50 additional hard pass holders, and Mr. Acosta is no more or less special than any other media outlet or reporter with respect to the First Amendment,” White House Press Secretary Sarah Huckabee Sanders said.

Sanders said that the reason for Acosta’s suspension is his conduct.

“After Mr. Acosta asked the President two questions — each of which the President answered — he physically refused to surrender a White House microphone to an intern, so that other reporters might ask their questions. This was not the first time this reporter has inappropriately refused to yield to other reporters,” Sanders said. “The White House cannot run an orderly and fair press conference when a reporter acts this way, which is neither appropriate nor professional.”

President Trump to @Acosta: “I think you should let me run the country, you run CNN, and if you did it well, your ratings would be much better” 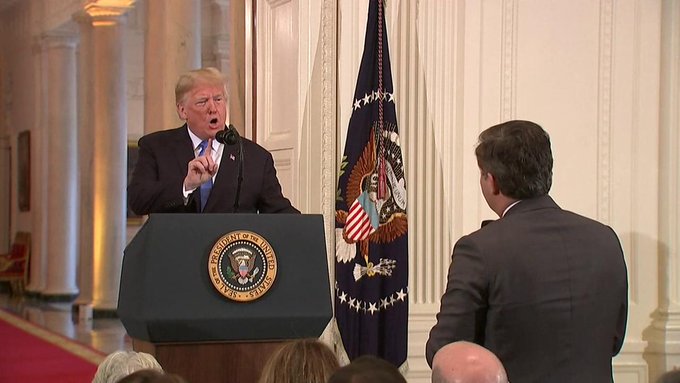 Anyone watching the video would agree that President Trump called on Acosta and answered several of his questions. It was Acosta who refused to cede the microphone and allow his colleagues to ask questions as well. This is not a First Amendment issue, it’s a decency issue.