Kanye West: ‘I’ve Been Used To Spread Messages I Don’t Believe In’

President Donald Trump’s outspoken fan Kanye West is criticizing “Blexit” founder Candace Owens for using his name in the Blexit campaign urging black Democrats to leave the Party. West took to Twitter Tuesday, where he said he has no involvement in the Blexit campaign, contradicting what Owens told Fox News.

I introduced Candace to the person who made the logo and they didn’t want their name on it so she used mine. I never wanted any association with Blexit. I have nothing to do with it.

West continued to tweet some of his political views, including prison reform and gun regulation:

I support creating jobs and opportunities for people who need them the most, I support prison reform, I support common-sense gun laws that will make our world safer.

7,293 people are talking about this

In the most popular tweet he sent in the string, West said “My eyes are wide open and now realize I’ve been used to spread messages I don’t believe in,” adding that he will distance himself from politics:

My eyes are now wide open and now realize I’ve been used to spread messages I don’t believe in. I am distancing myself from politics and completely focusing on being creative !!!

Owens apologized to West in a statement on her blog Wednesday:

“I never once said that Kanye designed the t-shirts for BLEXIT. This is a lie that seems to have made its way around the world; a lie I would like to again correct for the record. Kanye was completely right to feel used in that regard and as I have done personally, I would like to publicly apologize to him for any undue stress or pain the effort to correct that rumor has caused him, his business relationships, or his family. He simply never designed them,” she wrote.

However, on Twitter, she seemed to clarify that West helped design the “X” in the Blexit logo:

#BLEXIT is about the beautiful stories of so many black people who have awakened themselves to the possibilities of our future, as Americans.

The press is trying to use Kanye’s name to create drama and further divisiveness which is WRONG.

Here is statement of clarity from me: 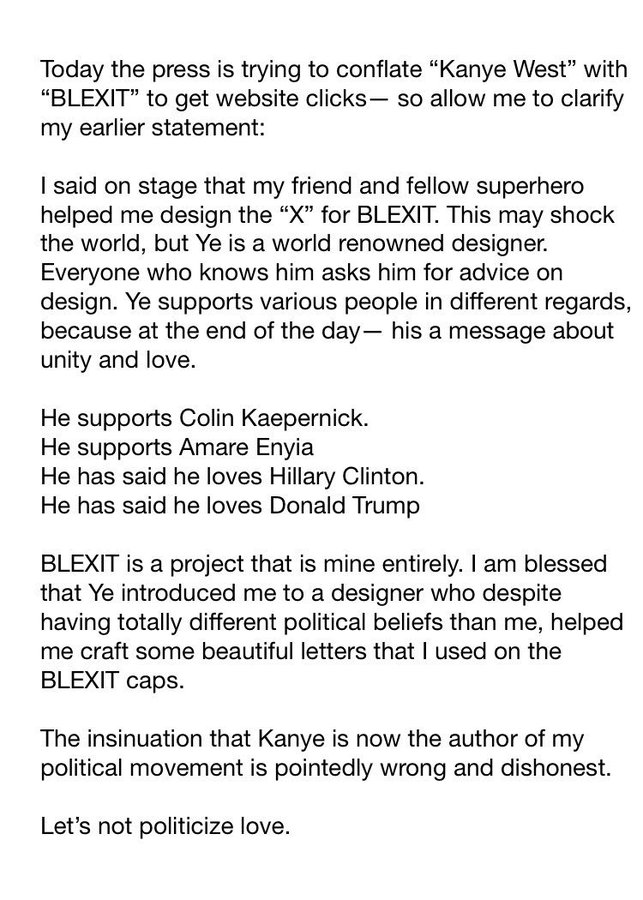 On her blog, Owen said she took “full responsibility” for “any and all confusion relating to this topic” and even apologized to President Trump.

“I would also like to publicly apologize to President Trump, as I know that Kanye’s tweets were rapidly misinterpreted as a shot to this administration,” she wrote. “His tweets were aimed at me and me only, rightfully, for my personal failings.”

Kanye West deserves some slack. He has been ridiculed in Hollywood ever since he announced his support for President Trump. Despite the good work he is doing to pursue a liberal prison reform agenda, the left-wing media and Hollywood stars denounce all his attempts to explain his reasonings. Perhaps it would do West good to take a break from politics, but in Hollywood, it’s doubtful he’ll be given any break at all.