Last week, Leftist journalist Ian Millhiser tweeted that liberals should “confront Republicans where they eat, where they sleep, and where they work,” prompting a debate from outraged conservatives.

Tell me again why we shouldn’t confront Republicans where they eat, where they sleep, and where they work until they stop being complicit in the destruction of our democracy.

Jeff Flake gets held accountable by sexual assault survivors in an elevator after he announces his vote for Kavanaugh. 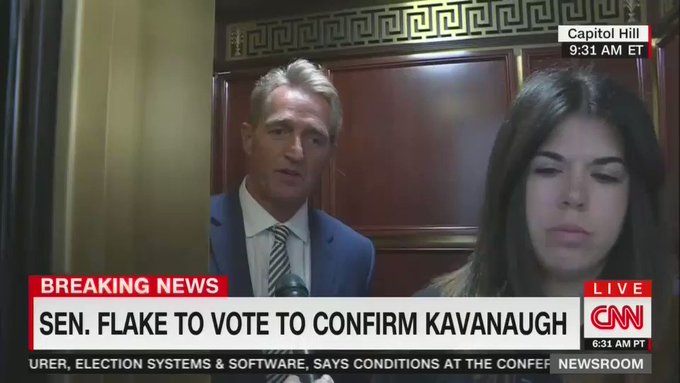 Millhiser, editor of Think Progress, was shot down by several other journalists including Ben Shapiro, Dana Loesch, Randy Barnett, Don Bongino and others who mocked him.

See, in a civilized society, you don’t get to come into my own home while I’m sleeping to “confront me.” That’s not a thing. WTAF.

This doesn’t sound threatening or creepy at all.

Because it is both wrong & supremely dangerous. When one side denies the legitimacy of good faith disagreement over policy–as well as over constitutional principle–the other side will eventually reciprocate. Neither a constitutional republic nor a democracy can survive that.

Millhiser’s comments come after Ted Cruz was confronted while eating dinner with his wife, weeks after the same happened to Homeland Security Secretary Kirstjen Nielsen and Press Secretary Sarah Huckabee Sanders, and after Democratic Congresswoman Maxine Waters urged her constituents to “push back” on those in the Trump administration.

Besides the humor used to attack Millhiser, it is important to consider the danger in what he is advocating for. When civil debate and policy disagreement turns personal, everyone suffers. We must recognize that there is no objectively correct policy. Some policies work better for certain people and are a detriment to others. There will never be a policy that benefits everyone equally, nor will there ever be a policy everyone agrees on fully.

The political process calls for debate and disagreement to find the middle ground and policy that the majority finds satisfactory. And even after that policy is implemented, there may be reason to discontinue it. Politics and policy is not a stationary exercise, it is always moving and there are always new policies that need to be debated.

But that said, debate should not be for personal gain in having your policy “win.” It is about finding the best solution. Everyone deserves to have a break from this debate and retreat to the privacy of their homes. Allowing the debate to continue when one side does not want to debate is not civil and it is unwarranted.