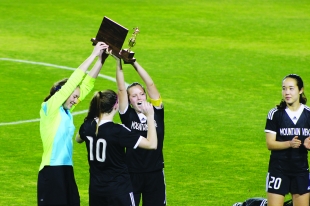 A historic Central Coast Section championship for the Mountain View High School girls’ soccer team just got better. The team, along with nine other girls’ soccer teams around the country, will be honored in the annual Tour of Champions.

The Spartans won their first Central Coast Section (CCS) Open Division title in school history this season after defeating Archbishop Mitty 3-1 in the finals on March 4. Mountain View finished the season with a record of 19 wins, one loss and three ties. The team is ranked fourth in California and eighth in the nation.

The team will be recognized at the Mountain View City Council meeting on April 25, and at a lunchtime ceremony featuring the Army National Guard in front of the school on April 26.

“It was so crazy. When I think of our team, I think of a small little team from Mountain View, not a nationally ranked, state-ranked, team,” said Natalie Brehaut, goalkeeper and one of the team’s senior captains. “It was a great wrap up for our season and one of the final things that helped people understand what our team did this year.”

“Considering there’s only 10 girls programs in the nation that get (this honor), I think that alone shows how unique and special it is,” said Bandov.

The Spartans ended their 2016 season with a heartbreaking 1-0 loss in the CCS finals to Woodside, a haunting memory that the seniors said contributed greatly to this season’s work effort.

“For the returners, (last year’s loss) was at least a motivating factor to get back to the final and finish out on top,” said Bandov.

“For the returning players, losing in the finals definitely left a sting. So people were really ready to come back from that,” said Allie Coyne, one of the senior captains.

The team worked hard and was well-trained coming into the season, Bandov said.

“We definitely had to put in the work because every team wanted to beat us,” said Karissa Hayes, one of the senior team captains. “The work effort is the most important part, and I think that that was part of the reason that we won it.”

Well over half of the team plays with the Mountain View/Los Altos (MVLA) club soccer team, allowing the girls to play together in the off season.

“A lot of these kids play MVLA … it’s a strong club, one of the best in Northern California,” said Bandov. “So the fact that they’re playing at a high level year-round is also a component of why they’re quality players and technically at a good level.”

“I think team dynamic was so important for us because we did many bonding activities and we’ve grown up with each other. It’s really being one with your team,” said Brehaut.

“Team chemistry is probably the best that we’ve had in years,” said Hayes. “In the beginning of the season we definitely had some ups and downs, but by the end we definitely believed in each other and could pull it out.”

Five of the seven graduating seniors have signed on to play college soccer next year.

“It will be exciting to track them in the fall, and I’ll stay in touch with them and see how everything’s going,” Bandov said.

Many of the girls on the team will be competing against each other in collegiate soccer .

“I’m going to be seeing them a lot on the field again, but we’ll be against each other, so it’s kind of a reverse,” Hayes said.

Even without the seven seniors, Coyne said the team has the potential to be just as competitive next season.

“Although we’re losing a lot of good players, there’s still definitely a lot of underclassmen with experience that will be able to carry the team to another high level next year,” she said.

Bandov said he was proud of the players, and not just for their performance on the field.

“I just feel fortunate to coach these kids. Both from a soccer standpoint and from a personal standpoint,” said Bandov. “They were just really fun to be around and I enjoyed showing up every day, whether it be a training or a game. Just to see how they progressed and how they treat each other made me proud to lead the program.”